This talk examines underground art and art communities during China’s Cultural Revolution. Centered on the Wuming (No Name) painting group active in the 1970s, it examines the interconnections between such art practice and community formation. It explores three promises of this case. As a history, Wuming challenges the orthodox verdicts of the Cultural Revolution. As a community, it reveals novel social forms and forces of grass-roots transformation within a militant society. And as art, it discloses an alternative modernism and modern identity. This study argues that underground art and solidarity formed a fresh critique and innovative response to China’s radical revolutionary modernity. Integrating anthropological fieldwork, historical research, and art historical analysis, it engages with the theoretical debates on modernity and its critique in a global and comparative context.

Aihe Wang is an Associate Professor in the School of Chinese at the University of Hong Kong, and has just finished her term as a member of the Institute for Advanced Study, Princeton. Her representative works include Cosmology and Political Culture in Early China, Cambridge University Press, 2000/2006, and theWuming (No Name) Painting Catalogue, 13 volumes, Hong Kong University Press, 2010. 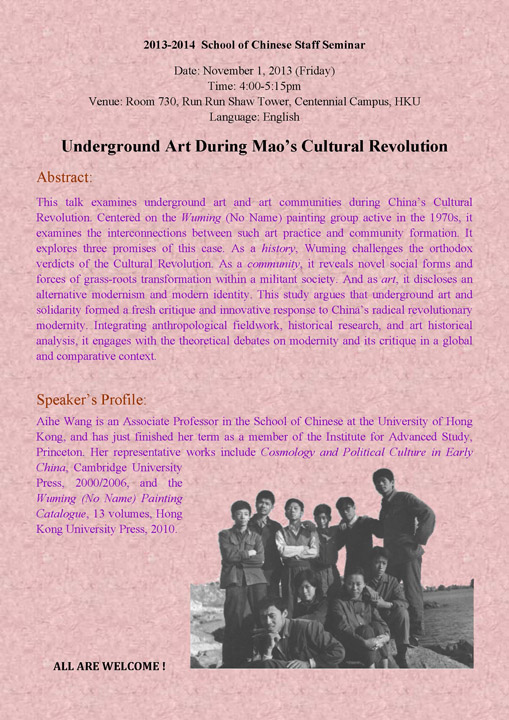