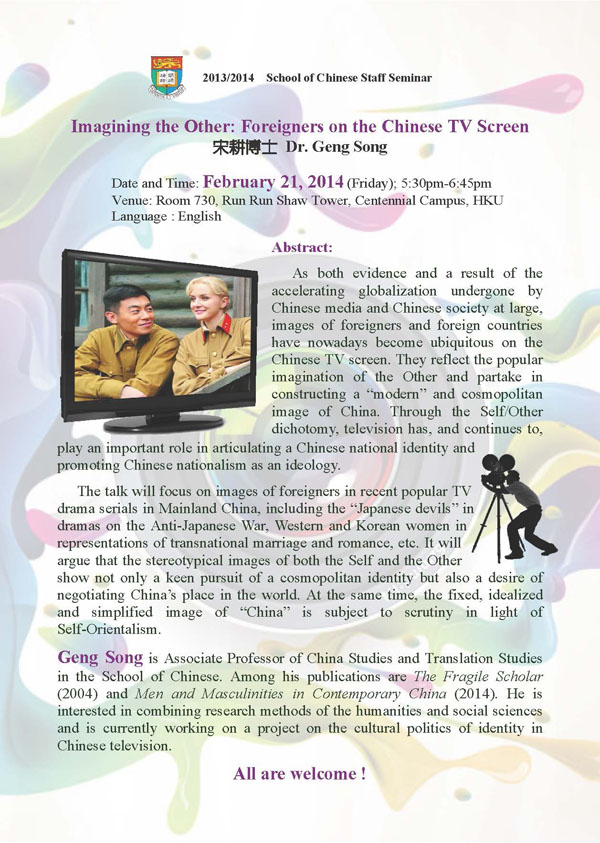 Imagining the Other: Foreigners on the Chinese TV Screen

As both evidence and a result of the accelerating globalization undergone by Chinese media and Chinese society at large, images of foreigners and foreign countries have nowadays become ubiquitous on the Chinese TV screen. They reflect the popular imagination of the Other and partake in constructing a “modern” and cosmopolitan image of China. Through the Self/Other dichotomy, television has, and continues to, play an important role in articulating a Chinese national identity and promoting Chinese nationalism as an ideology.

The talk will focus on images of foreigners in recent popular TV drama serials in Mainland China, including the “Japanese devils” in dramas on the Anti-Japanese War, Western and Korean women in representations of transnational marriage and romance, etc. It will argue that the stereotypical images of both the Self and the Other show not only a keen pursuit of a cosmopolitan identity but also a desire of negotiating China’s place in the world. At the same time, the fixed, idealized and simplified image of “China” is subject to scrutiny in light of Self-Orientalism.

Geng Song is Associate Professor of China Studies and Translation Studies in the School of Chinese. Among his publications are The Fragile Scholar (2004) and Men and Masculinities in Contemporary China (2014). He is interested in combining research methods of the humanities and social sciences and is currently working on a project on the cultural politics of identity in Chinese television.