Back to top
School of Chinese Manuscript Workshop for Professorial Staff
Social Memory and Historical Writing:
The Historical Images of Zhang Huangyan since the Early Qing
Dr. Wing-ming Chan
Date: November 17 (Tuesday)
Time: 3:30 pm – 5:00 pm
Venue: B730, Run Run Shaw Tower
Commentator: Prof. Dorothy Ko (Columbia University)
Moderator: Professor Shu-mei Shih
This is a study of the historical images of Zhang Huangyan 張煌言 (1620－1664), a Southern Ming (1644—1662) scholar-general who took part in the resistance movement from 1645 to 1662, and was eventually captured and executed by the Qing (1644—1912) government in 1664. It analyses how the posthumous public images of Zhang were constructed, reconstructed, and remembered in different times by the Ming adherents (yimin 遺民), the Qing subjects, the anti-Qing revolutionaries, and the modern Chinese nationalists. It also examines in what ways his images as a Ming loyalist, a Confucian martyr, a forerunner of Chinese revolution, and a national hero were shaped by the given socio-culture contexts. The various interpretations of this anti-Qing figure provide a good case study for our understanding of the complex interrelationship between social memory and historical writing.
Dr. Wing-ming Chan is Assistant Professor at the School of Chinese, University of Hong Kong. His research interests are Chinese intellectual history, history of Chinese historiography, and history of Qing China, on which a book and over thirty papers were published.
All are Welcome!
海報 Poster
http://www.hku.hk/chinese 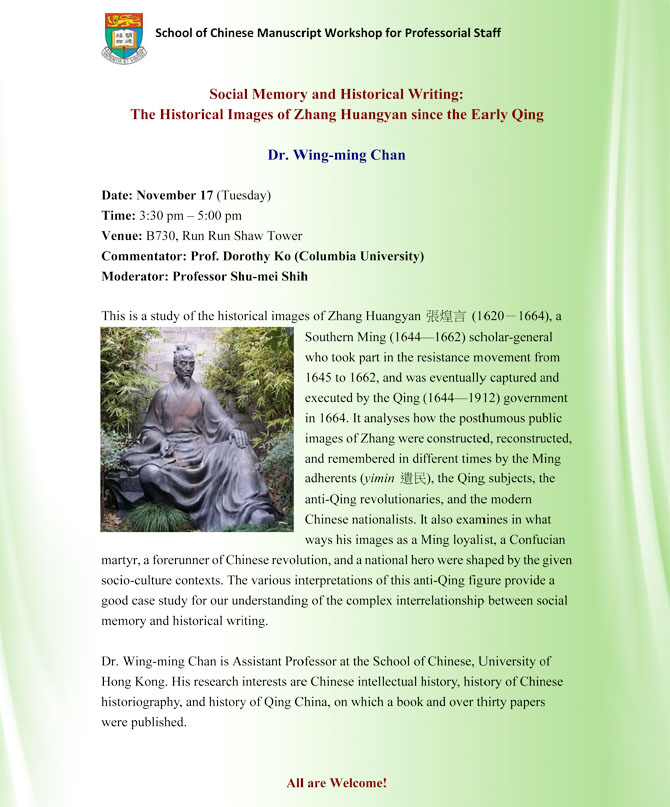