對話的可能：
以金聖歎及其形式批評群體與明清之際文學思潮為個案分析
The Possibility of Conducting an Open-dialogue with the West:
A Case Study through the Perspective of Discussing the Relationship between Jin Shengtan and His Formalist Criticism Literary Group and the Literary Trend during the Late Ming and Early Qing Periods

Abstract Formalist Literary Criticism is generally in a comparatively inferior position in the concept and history of Classical Chinese Literary Criticism.  However, its literary and cultural significance should be highly valued from the modern perspective. Among the formalist critics, spot light should be focused on Jin Shengtan (1608-1661) as his criticism not only reflects his comprehensiveness and depth of thoughts, but also his influence on the change of aesthetic trend during the late Ming and early Qing periods. Undoubtedly, this is interfaced by numerous factors, but the most important factor is that there was a crowd of followers around JIN, who triggered the growth of Formalist Criticism in the interim and afterward. Having its own discourse, the above-mentioned sort of criticism resembles the Formalist Criticism in the West, and this would probably facilitate the conduction of an open-dialogue with the western literary criticism.

About the Speaker WONG Wai Ho holds a PhD in Classical Chinese Literature from Nanjing University. He is currently working as Assistant Professor at Macau University of Science and Technology and Postdoctoral Fellow at Fudan University. His research interests include Classical Chinese Literature, Classical Chinese Literary Criticism and Modern Chinese Studies & Sinology Studies. He has published a scholarly book titled An Influence of the Relationship between Progenitor and Inheritor on the Progress of Chinese Classical Poetry: A Study on Relationship of Progenitor and Inheritor of Poetry during the Resurgence of Southern Song Dynasty, and a number of articles in Literary Heritage and other journals or conference proceedings. 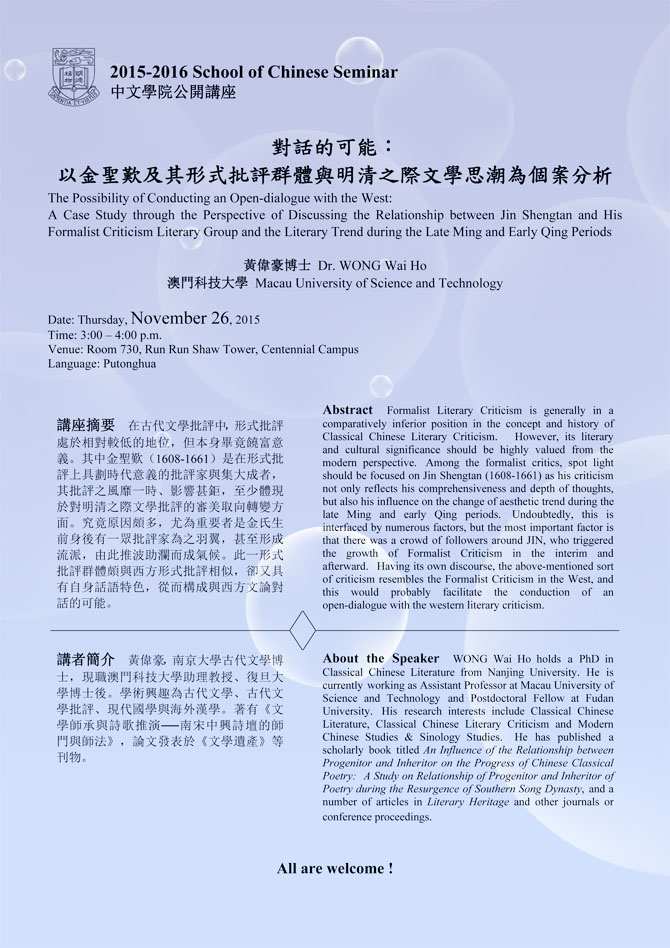