The Prefigurative Potential of Subtitling in the Egyptian Revolution

While interest in the political impact of translation has grown significantly in recent years, little has been done to examine its role in contemporary social and political movements. Drawing on research undertaken as part of an 18-month Fellowship funded by the Arts and Humanities Research Council in the UK, this presentation will focus on the use of subtitling by two collectives connected with the 2011 Egyptian Revolution: Mosireen and Words of Women from the Egyptian Revolution. While firmly embedded in a domestic movement of protest, both collectives are also part of a global culture of activism and seek to engage with wider movements of collective action and with global publics.

The focus of the discussion will be on the prefigurative potential of subtitling in this context. Prefiguration involves experimenting with currently available means in such a way that they come to mirror or actualize the political ideals that inform a movement, thus collapsing the traditional distinction between means and ends. Existing literature on prefiguration has examined how activist communities attempt to create in their own interactions and in the way they organize their work the kind of society they envision: non-hierarchical, non-representational, solidary, respectful of diversity. I will extend the discussion to explore the extent to which volunteer subtitling undertaken by disparate individuals for Mosireen and Words of Women supports or undermines the prefigurative agendas of these collectives visually and textually, focusing on the level of experimentation involved and the complex positioning of subtitlers in the context of high risk activism.

Mona Baker is Professor Emeritus of Translation Studies at the Centre for Translation and Intercultural Studies, University of Manchester, UK and is currently a Visiting Professor with Hong Kong Baptist University. She is author of In Other Words: A Coursebook on Translation (Routledge, 1992; second edition 2011) and Translation and Conflict: A Narrative Account (Routledge, 2006), Editor of Translating Dissent: Voices from and with the Egyptian Revolution (2016), the Routledge Encyclopedia of Translation Studies (1998, 2001; second edition, co-edited with Gabriela Saldanha, 2009); Critical Concepts: Translation Studies (4 volumes, 2009); Critical Readings in Translation Studies (2010); and co-editor (with Bolette Blaagaard) of Citizen Media and Public Spaces: Diverse Expressions of Citizenship and Dissent (in press). Her articles have appeared in a wide range of international journals, including Social Movement Studies, Critical Studies on Terrorism, The Translator and Target. She is founding Editor of The Translator (St. Jerome Publishing, 1995-2013), former Editorial Director of St. Jerome Publishing (1995-2013), and founding Vice-President of the International Association for Translation & Intercultural Studies (2004-2015). 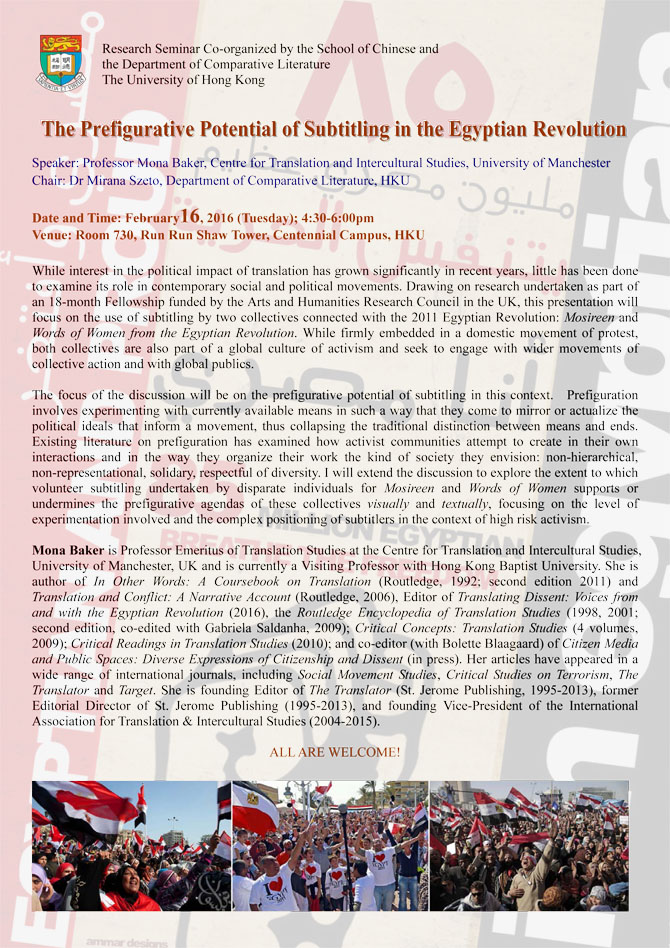