This talk explores how Lev Tolstoy’s work was discussed by both Marxist philosopher György Lukács and Chinese writer Eileen Chang during the global crisis of the 1930s and the Second World War. According to Lukács, Tolstoy’s fiction embodied the quintessence of realist narrative’s ability to capture the mass experience of history. For Chang, defending herself against charges of being a trivial and uncommitted pulp writer, Tolstoy’s work exemplified the value of a narrative process marked by the very serendipity and contingency mirrored in reality. All three writers struggled with a conception of a unified world both as a utopian ideal, and as a violent historic actuality produced by capital’s global and imperial logic. I explore the common resonances of war, narrative, and history that run through Lukács’ and Chang’s appropriations of Tolstoy, as well as examine the ways in which all three writers grappled with world-historical consciousness through literary form. Finally, noting Lukács’ and Chang’s common citation of Tolstoy as a monument to their own writing, I also articulate how all these writers engaged in a special kind of “world literature” indelibly marked by modern warfare and mass-produced suffering.

Roy Chan received his Ph.D. (2009) in Comparative Literature from the University of California, Berkeley, and also holds a B.A. (2002) in Russian and Comparative Literature from the University of Washington. He is currently completing a manuscript titled The Edge of Knowing: Dreams, History, and Realism in Modern Chinese Literature, focusing on the rhetoric of dreams and reality and its relation to issues of literature, modernity and revolutionary utopianism in modern Chinese fiction. His second project engages a translingual and transcultural literary critique of Soviet/Russian and Chinese literary texts that address the other country tentatively titled A Reflection of Sovereignty: Revolutionary Utopia and Transnational Desire in Russian and Chinese Literatures. A third project, in beginning stages of preparation, aims to comparatively explore “cultures of care” in Soviet/Post-Soviet and modern Chinese society, and their relation to psychology, counseling, biopolitics, and sociality and self. 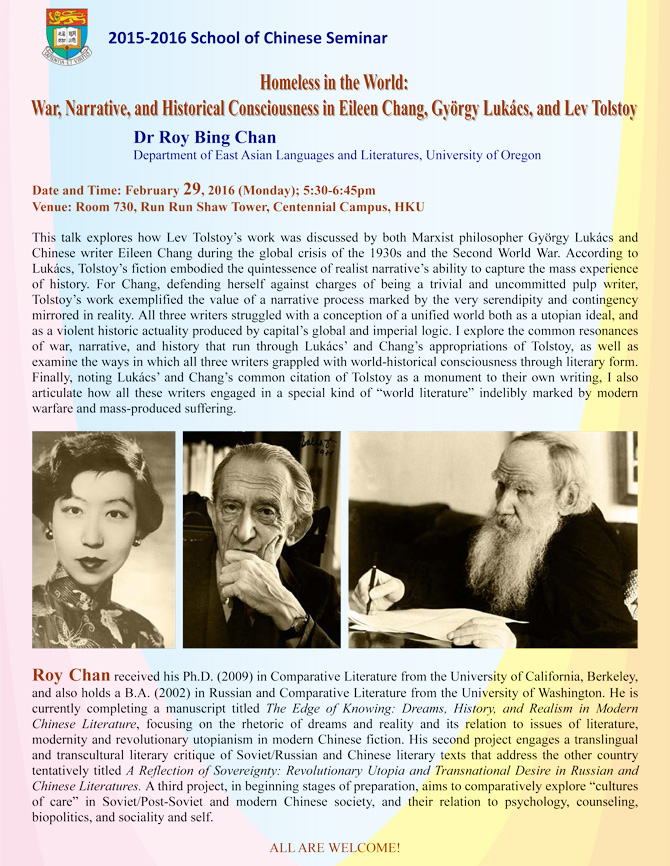