Back to top
2016-2017 School of Chinese Seminar
Film as Soft Power and Hard Currency:
The Sino-Hollywood Courtship
Professor Ying Zhu
The City University of New York
Date and Time: January 23, 2017 (Monday); 5:30-6:45pm
Venue: Room 730, Run Run Shaw Tower, Centennial Campus, HKU
My talk examines two periods when Hollywood dominates the Chinese market, one during the Republican era (1912-49), one since 1994 when Hollywood returned to the Chinese market after decades of absence due to a Chinese state enacted ban in 1950. I trace Hollywood’s historical China dominance while simultaneously sketching out the evolution of Chinese cinema from its infancy under the shadow of imports to its current global economic and cultural ambition. Framing the Sino-Hollywood engagement as a case of political, cultural and economic rivalry and cooptation, I elaborate on how economic interest intersects with political posturing and how film serves as a battlefield for cultural influence as China seeks to flex its growing economic muscle to promote soft power globally.
Ying Zhu is a Professor of Cinema Studies in the Department of Media Culture at the City University of New York. She has published eight books, including Two Billion Eyes: The Story of China Central Television (New Press, 2014), Television in Post-Reform China: Serial Drama, Confucian Leadership and the Global Television Market (2008), Chinese Cinema during the Era of Reform: The Ingenuity of the System (2003). Her publications further appear in leading academic journals and major media outlets such as The Atlantic, China File, CNN, Foreign Policy, The Los Angeles Times, The New York Times, and The Wall Street Journal. She is a recipient of 2017 Fulbright Senior Research Fellowship, an 2008 American Council of Learned Societies Fellowship, and a 2005 National Endowment for the Humanities Fellowship (US). Zhu also produces current affairs documentary films, including Google vs. China (2011) and China: From Cartier to Confucius (2012), She is currently working on a book, The Sino-Hollywood Courtship that parallels Hollywood’s contemporary China expansion and cooptation with the dominance and local resistance of American films in China during China’s Republican era.
ALL ARE WELCOME 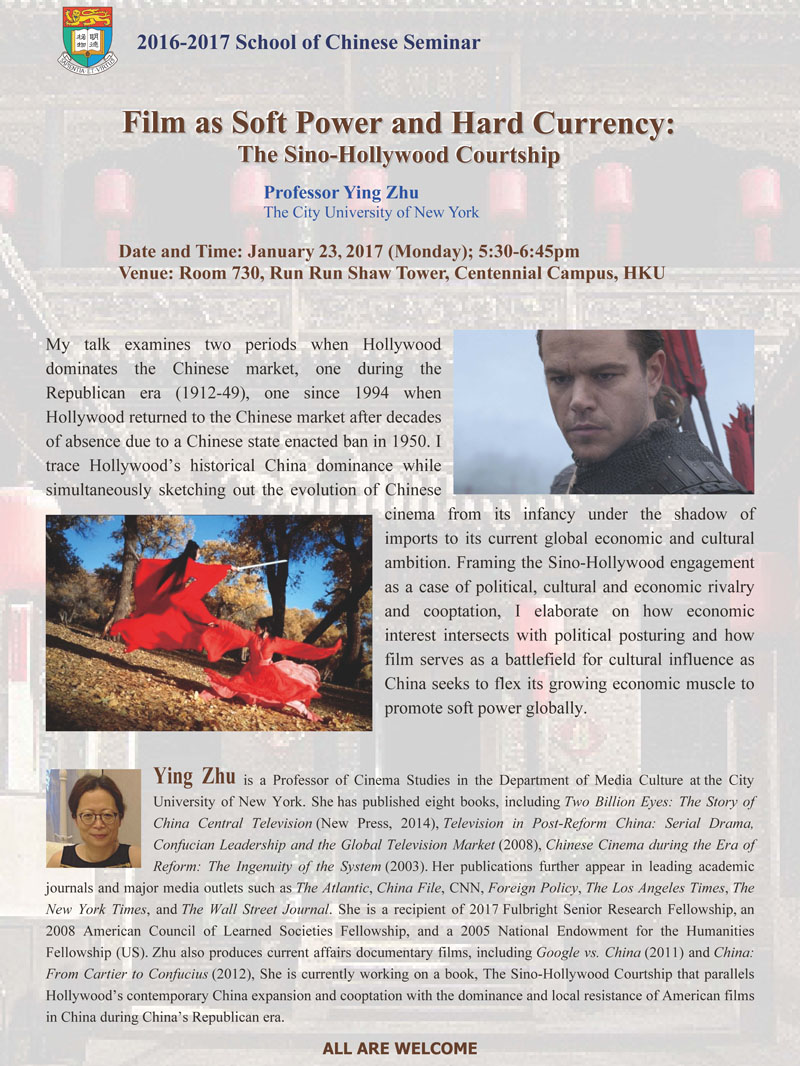