Back to top
2017/2018 School of Chinese Seminar Series
Writing China in Global Literary History
Professor Alexander Beecroft (University of South Carolina)
October 11, 2017 (Wed); 4:30-6pm; Rm 730, Run Run Shaw Tower
Language: English
World literature has thus far been largely a matter of pedagogy – anthologies for the classroom – and to a lesser extent of theory. But what about literary history? Is it possible to narrate a global literary history, and what would such a history look like? Would it be simply the (perhaps ungainly) sum of its parts: a Frankenstein’s monster stitched together from the national and linguistic literary histories which have already been written? Would it be a history of the worlds in which literature has circulated, and therefore primarily of those texts which have circulated outside expected boundaries? Would there be a single master-narrative of the ascent of humanity’s literary imagination, a narrative resembling the old “rise of the West” story, but rewritten to encompass the globe? Or might there be a more appealing alternative than any of these?
Whatever the case, an especially large and prominent section of the challenge lies in China, with its vast literary tradition extending over thousands of years and shaping the literature of its neighbors, themselves nations with large vernacular traditions of their own. But this interplay between an ancient classical tradition and its various vernacular offshoots (within and beyond the frontiers of imperial China) provides in fact a basis for comparison with other world regions, especially with South Asia and with the combined area of Europe and the Middle East – and, as I will show, a narrative link robust enough to connect these regions without flattening out obvious and vital differences.
Professor Beecroft teaches courses in Greek and Latin language and literature, ancient civilizations, literary theory, and the theory and practice of world literature at the University of South Carolina. His research interests include the literatures of Ancient Greece and Rome, pre-Tang Chinese literature (i.e. before AD 600), as well as current debates about world literature. He is the author of Authorship and Cultural Identity in Early Greece and China: Patterns of Literary Circulation (2010) and An Ecology of World Literature: From Antiquity to the Present Day (2015). He is currently working on his third book A Global History of Literature (under contract with Johns Hopkins UP).
All are welcome!
Poster
http://www.hku.hk/chinese 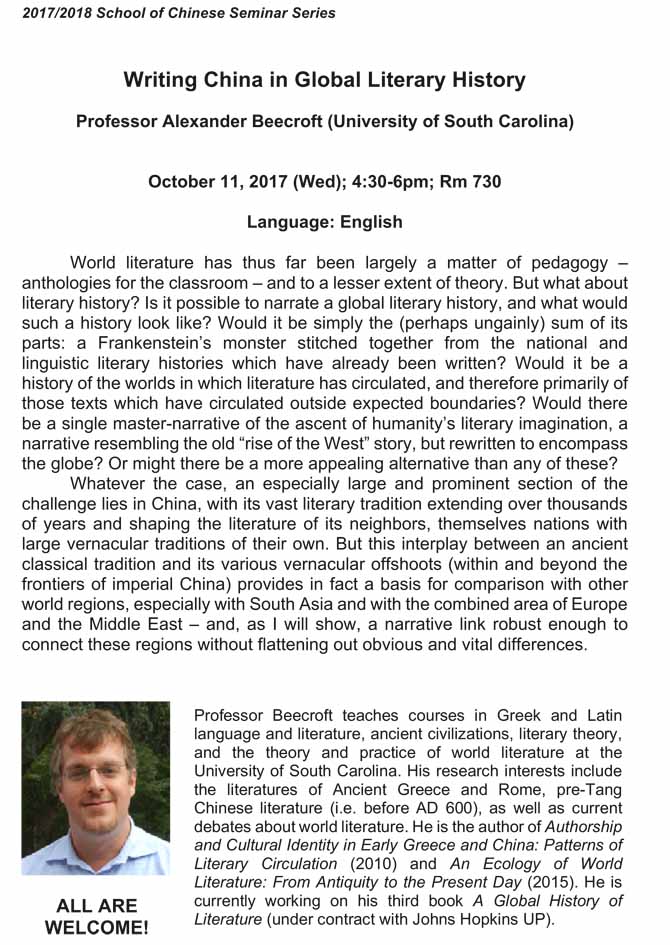