Back to top
2017-2018 School of Chinese Public Lecture Series
Law and the Circulation of Documents by Scribes in the Early Chinese Empires
Robin D.S. Yates  葉山
(McGill University and Hong Kong Baptist University)
November 17, 2017 (Friday); 4:30-6:00pm
Room 730 Run Run Shaw Tower, Centennial Campus
Language: English
How the central authorities controlled the production and circulation of millions of documents in the early Chinese empires and also managed the tens of thousands of scribes in their employ throughout the expanding empire is the central question of this paper. The primary source material will be the newly discovered and retrieved “Statutes on the Forwarding of Documents” deposited in the tombs of scribes as well as on archival sources from Well no. 1, Liye, dating from the Qin Empire and documents recovered from the forts and relay stations in the north-west desert from Han times. Building on recent secondary scholarship by Asian and western scholars, I will analyze how the central government tried to systematize and regulate the format and types of documents, who carried them from location to location up and down the administrative hierarchy (low-ranking officials, convicts, and perhaps slaves), the means by which documents were transmitted (horse, carriage, boat, foot), and the time requirements for travel. I shall propose that it was this massive circulation of documents that helped integrate the empire and build a consciousness among the people of being the subjects of a single legitimate regime, thus building the unified sense of time and place that in turn contributed to the spread of (literate) culture in the early Chinese empires.
Robin D.S. Yates, James McGill Professor of East Asian Studies and History and Classical Studies, McGill University, and Visiting University Fellow, Hong Kong Baptist University (Aug-Dec 2017), is a specialist on the social and cultural history of early China, the history of Chinese military science and technology, the history of Chinese women, and the history of Chinese law. Trained at Oxford, Berkeley, and Harvard University (PhD, 1980), he has received many awards, held many positions, and was elected to the Royal Society of Canada, Division of the Humanities of the Academy of the Arts and Humanities, in 2010. His most recent monograph, Law, State, and Society in Early Imperial China: A Study with Critical Edition and Translation of the Legal Texts from Zhangjiashan Tomb no. 247 (with Anthony Barbieri-Low), was released by Brill in 2015. He is currently working on a research project titled, “Qianling County, 222-209 BCE: Life in and under Qin Local Government,” that is analyzing documents recently excavated from Well no. 1, Liye, Hunan Province.
ALL ARE WELCOME 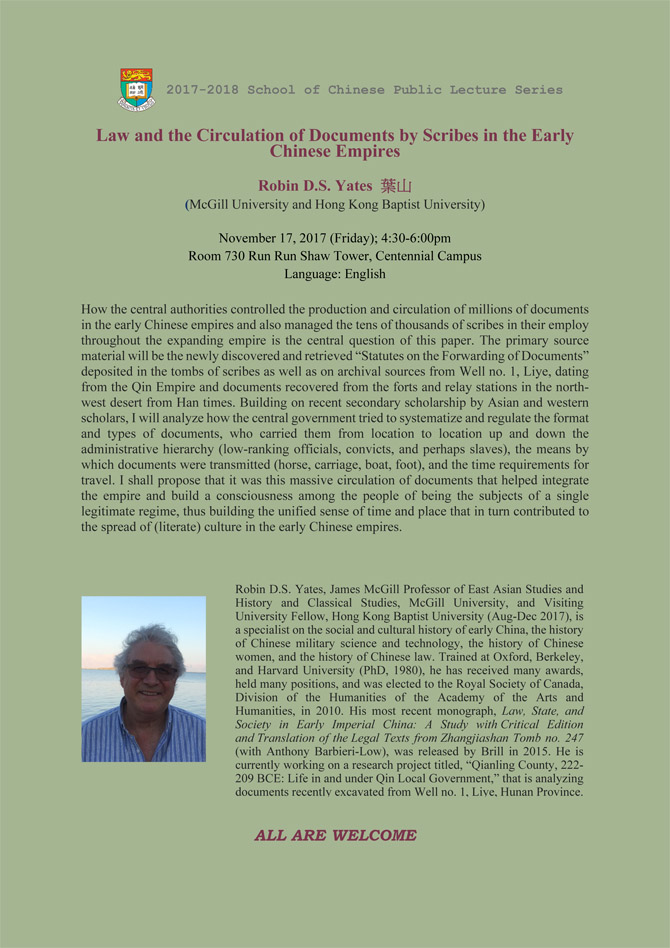