In October 2014, Chinese leader Xi Jinping held a widely publicized meeting with representatives of literary and artistic circles. A year later the full text of his speech at the meeting was published and became the foundation of PRC cultural policy. Western observers were quick to point out analogies between Xi’s meeting and the Yan’an forum of 1942, when Mao Zedong laid down the rules of art for the socialist period. Others opined that Xi’s speech had heralded a return to the policies of the Cultural Revolution. Yet a closer analysis of Xi’s text shows that he used his speech to reiterate and solidify a moralistic view of literature and art that has been the consensus in government circles since the start of the reform period in 1978. According to this consensus, cultural work is significant because it spreads the positive values of “truth, goodness, and beauty”—a triad well-known from the history of European philosophy and often used to build moralistic value systems. Xi Jinping and his speech writers awkwardly combine this traditional European view of the nature of art with a call for greater adherence to native Chinese traditions, and for patriotism.

This talk will trace the history of the triad “truth, goodness, and beauty” in modern Chinese cultural discourse and look in detail at its application in the formulation of cultural policy since 2014. It also looks at the effect of the discourse on cultural production and the shifting levels of tolerance for deviation from prescribed moral standards.

Michel Hockx is Professor of Chinese literature and director of the Liu Institute for Asia and Asian Studies at the University of Notre Dame. He has published widely on modern Chinese literary communities, their practices and their values, their printed and digital publications, and their relationship to the state. His monograph Internet Literature in China (Columbia UP, 2015) was listed by Choice magazine as one of the “Top 25 Outstanding Academic Titles of 2015.” 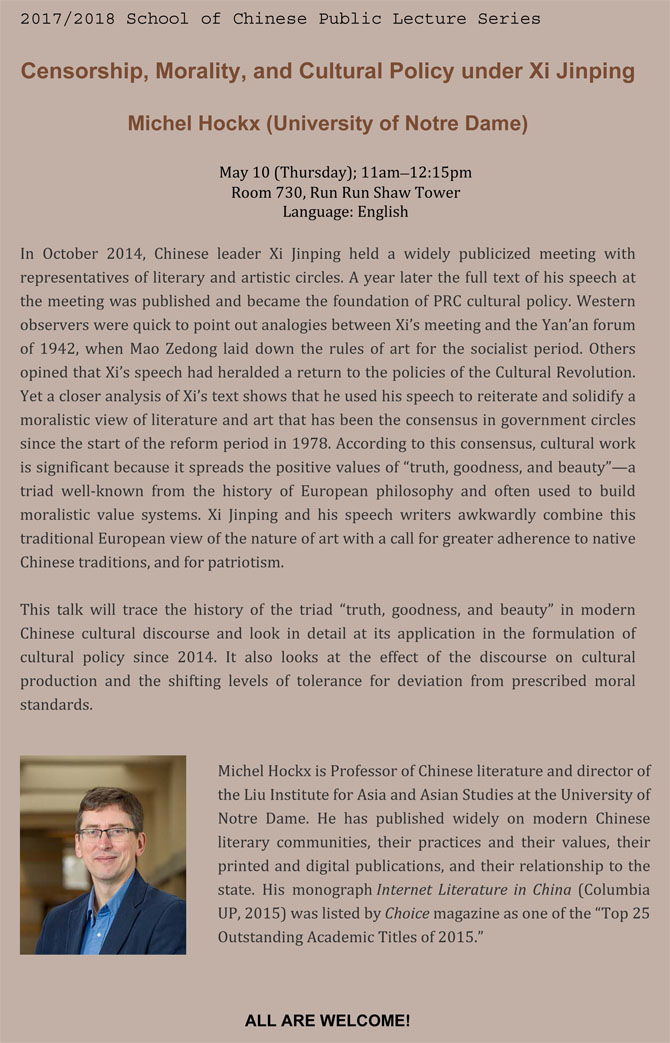