Back to top
Dr Lucas Klein Book Launch:
The Organization of Distance: Poetry, Translation, Chineseness
Li Shangyin
October Dedications: Selected Poems of Mang Ke
時間Time: 4:30 p.m. – 6:00 p.m. Monday 8 October, 2018
地點Venue: Room 730, Run Run Shaw Tower, Centennial Campus, The University of Hong Kong
Dr Lucas Klein is Assistant Professor in the School of Chinese at the University of Hong Kong.  A writer, translator, and editor, his work has appeared in Jacket, Rain Taxi, CLEAR, and PMLA, and from Fordham, Black Widow, and New Directions his translation Notes on the Mosquito: Selected Poems of Xi Chuan won the 2013 Lucien Stryk Prize.
What makes a Chinese poem “Chinese”? Some call modern Chinese poetry insufficiently Chinese, saying it is so influenced by foreign texts that it has lost the essence of Chinese culture as known in premodern poetry. Yet that argument overlooks how premodern regulated verse was itself created in imitation of foreign poetics. Looking at Bian Zhilin and Yang Lian in the twentieth century alongside medieval Chinese poets such as Wang Wei, Du Fu, and Li Shangyin, The Organization of Distance applies the notions of foreignization and nativization to Chinese poetry to argue that the impression of poetic Chineseness has long been a product of translation, from forces both abroad and in the past.
All are welcome 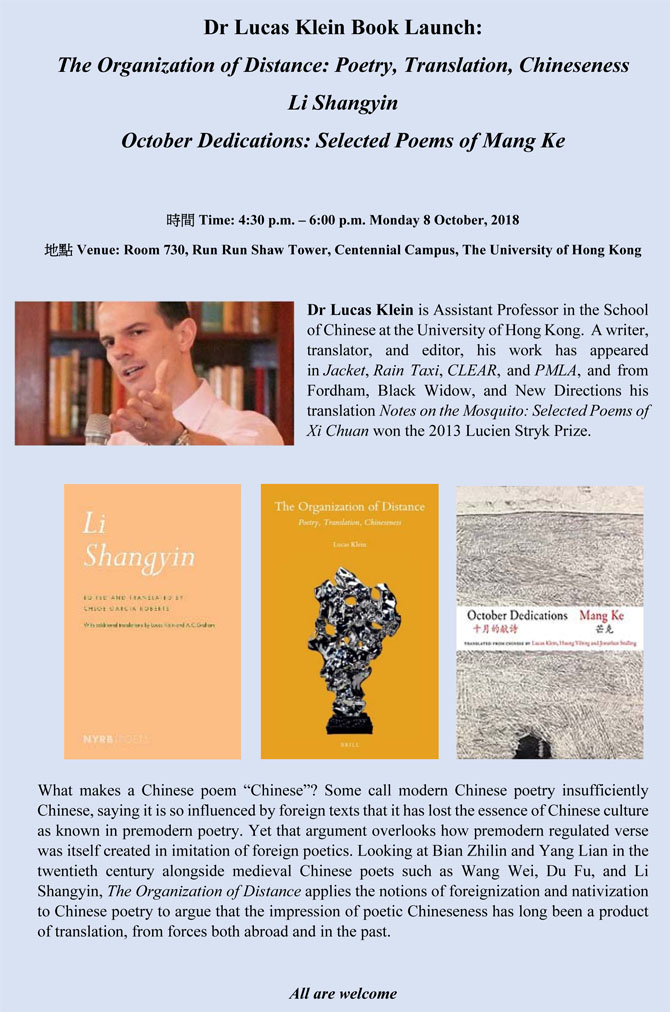