Back to top
2018-19 School of Chinese Hon-yin and Suet-fong Chan Professorship Endowment Lecture Series
“Daodejing and the Beginning of Orientalism in Central Europe”
Olga Lomová
Professor and Director, Institute of East Asian Studies,
Charles University at Prague
Time: 4:30 p.m. – 6:00 p.m. Tuesday 23 October 2018
Venue: Room 730, Run Run Shaw Tower, Centennial Campus,
The University of Hong Kong
Language: English
The lecture will introduce early translations of the Daodejing into western languages, including its varied interpretations widespread in Central Europe during late 19th and early 20th century. It will discuss the situation in the German speaking world, eventually turning to the case of Czech translations responding to the changing demands of the Czech national revival movement. Discussion of these topics will also in a critical manner touch upon the issue of Orientalism and the beginnings of the academic field of Sinology.
Professor Olga Lomová is director of the Institute at East Asian Studies at Charles University and director of the CCKF International Sinological Center at Charles University in Prague, as well as director of the Charles University transdisciplinary research platform Institute for the Study of Strategic Regions.
Professor Lomová’s main field of interest is history of Chinese literature with special focus on Chinese poetry, classical and modern, and Chinese historiography. Her second field of interest is the intellectual transformation in 20th century China and the interplay of ideology and literature in the People´s Republic of China. Recently she has been also working on the history of Sinology, particularly in former Czechoslovakia, including “the Prague School” as represented by Jaroslav Průšek and his students. Since 2018 she heads a research group on interaction between cultures within Charles University large transdisciplinary research project “Creativity and Adaptability as Conditions of the Success of Europe in an Interrelated World” supported by the European Regional Development Fund.
Her favourite occupation is translation of Chinese literature and she has published several books ranging from Sima Qian´s Shiji, Tang poetry, late Qing wuxia xiaoshuo, and PRC post-Cultural revolution literature. She also frequently contributes articles about Chinese culture and politics to Czech media. In 2016 she was one of the initiators of AcaMedia project aiming at connecting expert knowledge with media and general public.
All are welcome 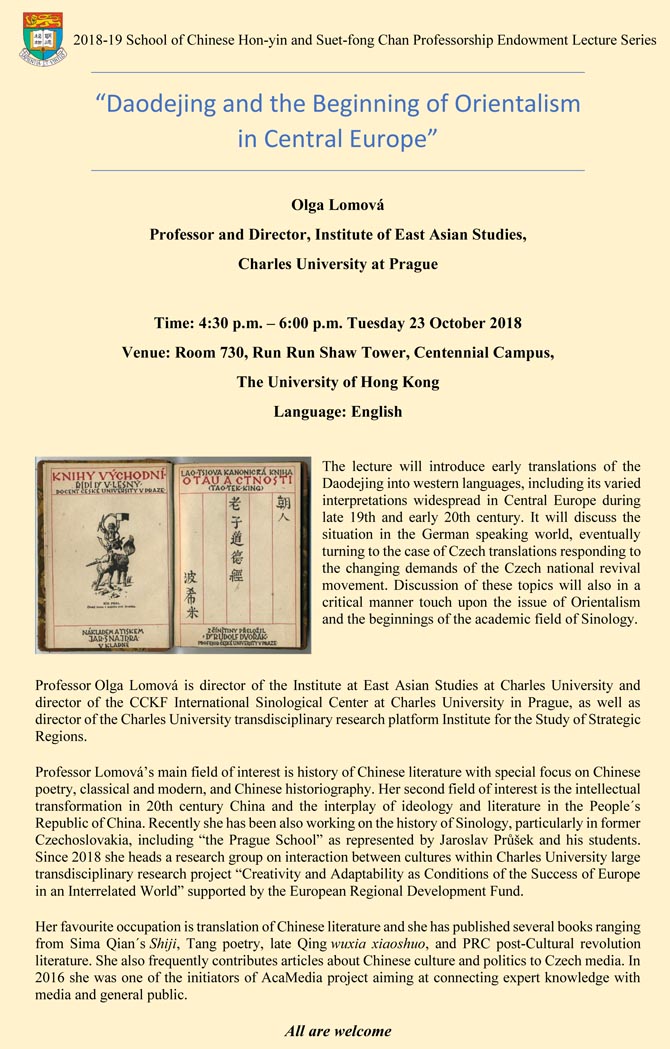