Writing, Reading and Performing Ming Chuanqi Drama Musically: The Case of “Happy Time” 佳期 from The Story of the Western Wing 西廂記

Many scholars have critically studied Ming chuanqi drama as Chinese literature, history and cultural representation, acknowledging that the genre was not only produced for reading but also for multi-media performance. How chuanqi text was, and/or can be, realized on stage is nevertheless an understudied topic. For instance, how chuanqi aria lyrics (qu) can be read and performed as songs/musical compositions is a question that has few musicologically illustrated answers. Many studies would only address the issues with theoretical prescriptions and/or observations on the ways linguistic and melodic aspects of the arias are interrelated. To probe the issues of writing, reading and performing chuanqi drama musically, this talk presents a case study, one that musicologically examines the “Happy Time” scene in the southern version of The Story of the Western Wing (南西廂). This talk posits that unless chuanqi texts are read musically, their operatic artistry and creativity will be glossed over, and the sonic expressions and meanings of the dramas, unappreciated.

Joseph S. C. Lam is Professor of Musicology at the School of Music, Theatre, and Dance at the University of Michigan, and Director of the Confucius Institute at the University of Michigan. A musicologist and Sinologist, Lam specializes in the musics and cultures of Southern Song (1127-1275), Ming (1368-1644), and modern China (1900 to present). Lam regularly and extensively lectures in China, and Europe, and the US. Lam’s recent publications include: Songdai yinyueshi lunwenji: lilun yu miaoshu/Historical Studies on Song Dynasty Music: Theories and Narratives (Shanghai: Shanghai Conservatory of Music Press, 2012); “‘Escorting Lady Jing Home’: A Journey of Chinese Gender, Opera, and Politics” (Yearbook for Traditional Music, 2014); “Ci Songs from the Song Dynasty: A Ménage à Trois of Lyrics, Music, and Performance,” in New Literary History 46.4 (2015), and “Eavesdropping on Zhang Xiaoxiang’s Musical World in Early Southern Song China,” in Senses of the City, edited by Joseph Lam, Shuen-fu Lin, Christian de Pee, and Martin Powers (CUHK Press, 2017). Currently, he is preparing for publication a monograph entitled Kunqu, A Classical Opera of Twenty-first Century China. 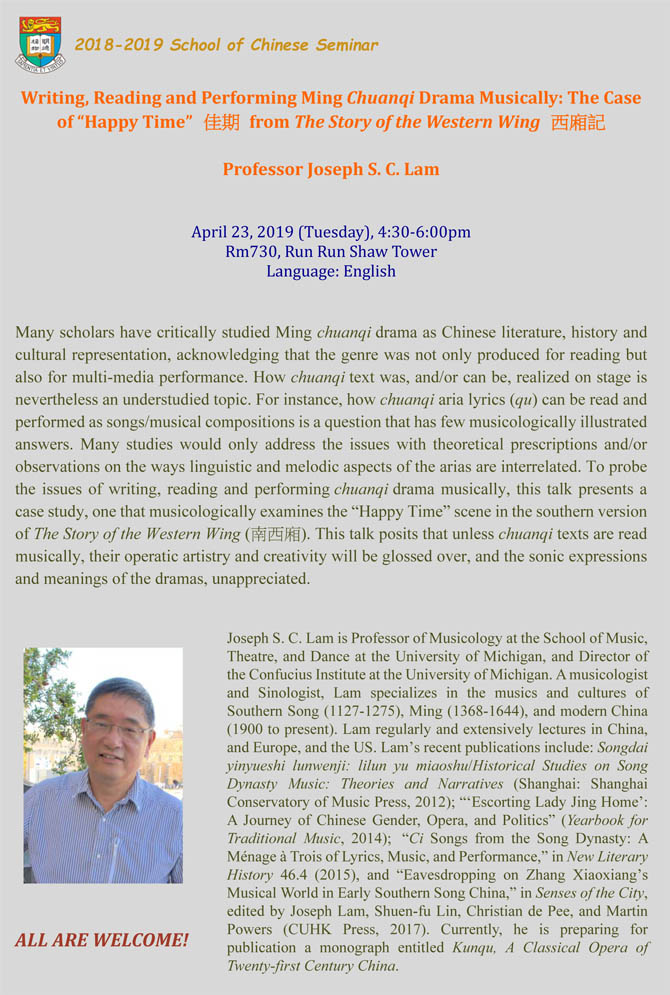