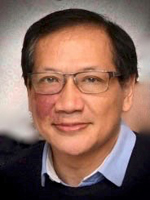 Joseph Hon Kwong POON received his BA and MPhil from the University of Hong Kong. He had studied for a DPhil at Oxford University for a couple of years before returning to HKU in 1989 and began his teaching career. At the School of Chinese, he is now Associate Professor in Translation, Programme Director of MA in Translation, Chairman of Departmental Research Postgraduate Committee, and member of the School Management and Development Committee. He teaches mainly Translation, specializes and has published on literary translation, classical literature, literary criticism and language education.

At HKU, Mr Poon has taken up a great deal of administrative duties over the years from University to Faculty and to School levels. They include: various Search Committees, Committee on Discontinuation, Faculty Admissions Committee, Faculty Budget and Planning Committee, and Higher Arts Degrees Committee; and at the School level, the School Management and Development Committee and the Departmental Research Postgraduate Committee.

Mr Poon received a Faculty Knowledge Exchange Award a few years ago to work on a bi-lingual mental healthcare web-site. He is at present working closely with his colleagues in the School of English to produce a research paper.

Mr Poon is active in the local translation scene, being a Vice-President of the Hong Kong Translation Society, and founding editor of its academic journal the Translation Quarterly. For more than two decades now, he has been an adjudicator for all translation competitions in Hong Kong. For other local institutes, Mr Poon has served in the Review Panel for their Translation programmes. They include Baptist, Lingnan, and HKUSPACE. Currently, he is serving a second 3-year appointment as External Examiner for CUHK (Shenzhen)’s MA in Translation. And for numerous times, Mr Poon has been External Examiner for MPhil and PhD theses of other local universities.

Over the years Mr Poon has successfully supervised a great number of research students. Most of them are now teachers of higher education institutes, notably they include two professors.

Major conference papers (all in English):